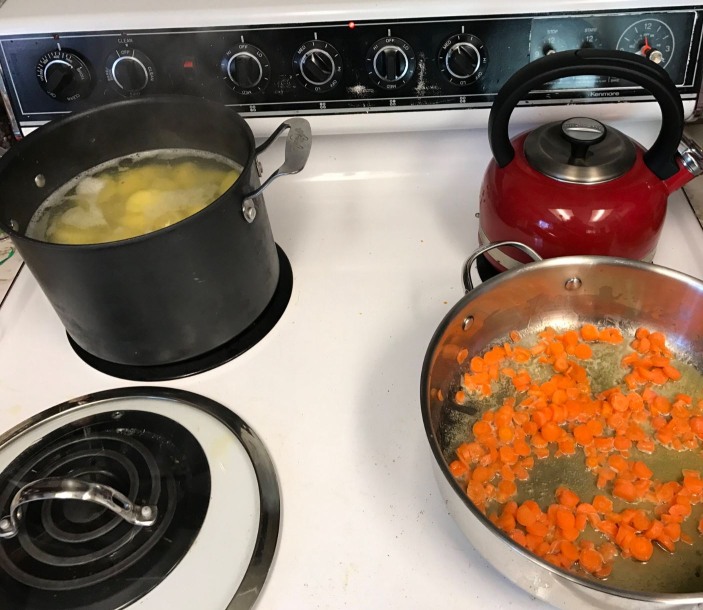 One of my very favorite restaurants, Fresco Cafe, has daily specials. My friends and I used to call into their specials phone line every morning, a little after 10. You’d hear a recording of someone reading off their menu board. Towards the end, they’d list their daily special entree. They had a lot of great specials, like their barbecue pork tenderloin sandwich or their filet mignon enchiladas. But some days were different. On those rare and precious days, the entree would be shepherd’s pie.

Shredded beef braised with wine mixed with an assortment of vegetables, smothered with lightly browned mashed potatoes. Served in a ceramic dish, their shepherd’s pie would have the entire office making lunch plans. We’d reschedule meetings, plan out our paths to cross by Five Points around lunch, and try to find a big enough table.

After moving to Washington, my trips to Fresco became a lot less frequent. To fill that void, I started working on my own recipe for shepherd’s pie. I don’t eat lamb and my wife hates mushrooms, so many traditional recipes didn’t work. After a few months and many attempts, I ended up with a recipe that tastes close enough to Fresco’s but also stands on its own. It’s become a family favorite during the rainy season here .

Shepherd’s pie consists of two main parts: the meat and the potatoes. First, the meat.

I started with Alton Brown’s recipe as a base, and went from there.

I use a big stainless steel pan with straight sides. Add some oil to the pan, and set to medium-high heat.

Add the onion, celery, and carrots. Stir and cook until starting to brown, a couple of minutes. I usually give the onions an extra 30 seconds alone before adding the rest. Add the garlic, continue to stir.

Add in the meat. Add salt and pepper, but not too much. You’ll have time for flavor adjustment later. Brown the meat, stirring. Sprinkle the flour over the mixture.

Once you’re happy with the meat’s browning, it’s time to add the liquids. Put in the tomato paste, broth, worc sauce, and wine. Stir well. Once it’s combined, add in the thyme and rosemary.

Bring the entire mixture to a boil. Once you see the bubbles, reduce to medium-low and simmer. As it cooks, the mixture will reduce some. After 10-15 minutes, the meat should be breaking down and the vegetables should be soft.

Now is the time to adjust seasoning. I’ll add salt, pepper, thyme, or rosemary as needed between taste tests. Once you’re happy with the flavor, toss in the peas and then pour it into your 11”x7” glass pan.

I started with J. Kenji López-Alt’s recipe as a base, and went from there. You probably want to start the potatoes first when you’re making the recipe.

I peel and cube the potatoes, and rinse once in cold water after cubing.

I fill a pot with water, and bring to a boil. I don’t salt the water.

I add in the potatoes, and cook for 15 minutes.

I drain the potatoes in a strainer, and only give a quick rinse with hot water. Just a quick spray from the hose faucet. Make sure you shake the potatoes dry afterwards.

Mash the potatoes, and add salt and pepper to taste. Avoid adding too much liquid, as you don’t want the potatoes to be runny. They’ll mix with the meat if they’re too runny. I make sure I like the taste with just salt & pepper, then I add the cheese in.

With the meat on the bottom, add the potatoes carefully to the top of the meat. You want to avoid any mixing. I spoon the potatoes on gently, then use a spatula to spread evenly. Once you have a smooth surface, use a fork to make spikes and peaks for extra browning in the oven. Sprinkle with any remaining cheese for a little something extra. 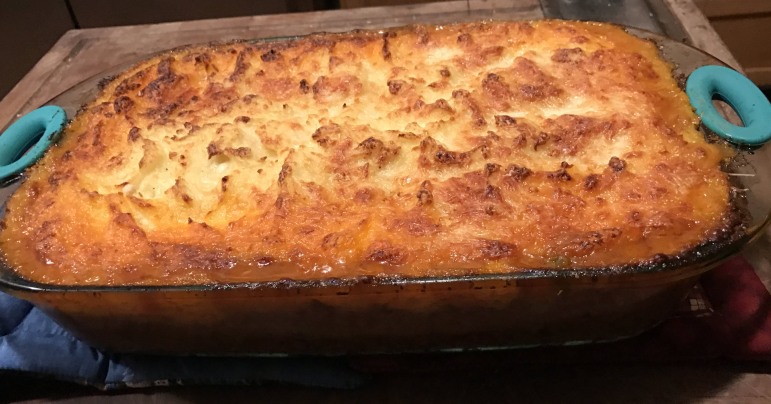 Then, you eat it.